Brad Porter, VP of Robotics at Amazon, on Warehouse Automation, Machine Learning, and His First Robot

Are Delivery Drones Commercially Viable? Iceland Is About to Find Out 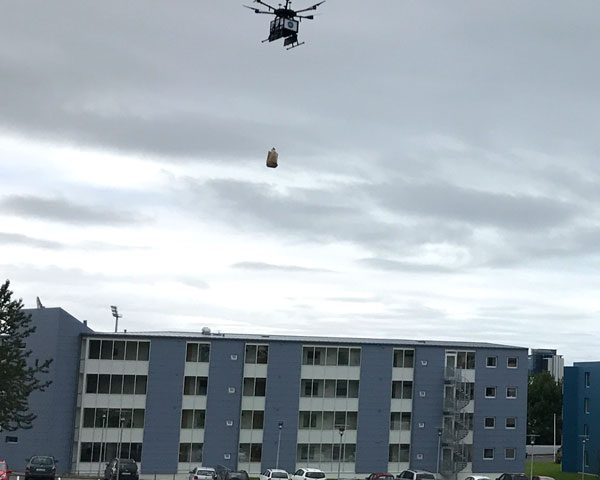 An Icelandic startup called Aha is using a Chinese-made drone and an Israeli logistics system to deliver hot food, groceries, and electronics to households in Iceland’s capital city of Reykjavik.

It’s a world’s first, and one that flouts the standard aviation safety mantras. These drones don’t sense and avoid ­obstacles—in fact, they don’t even have cameras, radar, or any other imaging systems. They fly according to GPS coordinates, along routes certified free of trees, buildings, and other impediments. And with some 500 deliveries completed in the past five months, no injuries have been reported.

It works like this: You punch your order into an app on your smartphone (“Two hamburgers, hold the onions”) and Aha’s cook loads the food onto the drone. Then you track the delivery, go outside to welcome it, and if all’s well at the drop-off point, you agree to accept it. Then the drone lowers your burgers on a line and buzzes home.

Delivery is around US $7. That’s enough to cover operational costs, says Maron Kristófersson, the chief executive officer of Aha. “The electricity comes to 25 cents,” he says.

A delivery can be completed in as little as 4 minutes, versus 25 minutes when delivering by road, under heavy traffic. That’s perfect for hot food (burgers are the most popular item), but customers also seem to value it for groceries (where bananas rule) and hardware (mostly electronics).

Kristófersson began to look into autonomous delivery schemes in 2014 as a way to deal with skyrocketing labor costs. But when he turned to drone companies, he found that nearly all were lukewarm about Iceland’s tiny market.

Then, in 2015, he contacted Flytrex, a Tel Aviv startup that was selling GPS trackers to drone companies. Flytrex developed a logistics system based on those trackers rather than making a drone of its own. “This was much more pragmatic, in my view,” Kristófersson says.

“FedEx doesn’t produce trucks; they procure them,” says Yariv Bash, chief executive officer of Flytrex. “We do the same with drones. We have the know-how to choose the right drones and modify them to our needs, but our core competence is in logistics and cloud capability.”

Kristófersson told the Icelandic air authorities that they had a choice: ­Iceland could remain at the bottom of the list of countries that would develop drone delivery or it could be at the top. And to be at the top, Iceland had to put safety regulations in place.

After more than a year of back-and-forth talks, Aha got the go-ahead. The first experimental deliveries came earlier this year.

Aha is using the DJI Matrice 600 drone, which carries 3 kilograms of cargo and weighs 15 kg (33 pounds) fully loaded. It can fly 8 kilometers—4 km out and 4 km back—enough to cover the outer ring of ­Reykjavik from Aha’s operations center in the middle of town. The routes are surveyed and reviewed constantly to avoid new construction. To further decrease the risk, the drones are directed over water and unpopulated industrial areas as much as possible.

Initially, the drones arrived at a dozen or so set drop-off points on the outskirts of the city. A company representative would have to wait to receive the drone and pull the package out of a cargo compartment. These deliveries gave experience to Aha and peace of mind to the safety regulators.

Then, in August, the company got permission to lower packages on a line to select homes. “It can drop a package almost on a carpet in your backyard,” says Bash. All you have to do is get your neighbors to agree to the plan.

That’s rarely a problem, says Kristófersson. When you mow your lawn, you cause much more disturbance, he insists.

Flying blind has been a contentious issue in other jurisdictions around the world. In the United States, the Federal Aviation Administration is sticking to its sense-and-avoid requirement. But the agency has recently allowed test flights, including one by Wing, a subsidiary of ­Alphabet (Google’s parent company), to go farther than the operator can see with unaided sight.

Bash says that two countries—he won’t give their names or even their continents—are about to allow projects like the one Flytrex and Aha have started in Iceland. And why not, he argues, when drone delivery poses less risk than some other practices that we allow in our lives.

“Which is safer,” he asks, “a 16-year-old driving a 2-ton vehicle to your house every time you want [a] hamburger, or sending a 30-pound drone that didn’t miss any sleep the night before?”

Video Friday: Drone in a Cage

Reply on TwitterRetweet on Twitter1Like on TwitterTwitter
Load More...